When Sara set a New Year's resolution to challenge herself, she never thought that would mean winning an international film contest and traveling to Tokyo.

Meet Sara Crochet, ’17, who won gold for her film “Exulansis” in the 2019 international Nikon Photo Contest. The winners’ ceremony was in Tokyo, where Sara was awarded her own professional-grade Nikon camera.

She credits her win to the hands-on experience and mentorship she received in the Moving Image Arts program, the rich, artistic culture that Lafayette provides, and the support of her family and friends.

One of Sara’s favorite aspects of studying Moving Image Arts at UL Lafayette was the ability to get her hands on a camera right away. She worked as a camera operator and a producer on “Local Produce,” an online video series for KRVS 88.7 FM, the University’s NPR affiliate.

“Just to be able to step into that realm of working on set showed me that this field of work is definitely what I want to do,” Sara said.

Sara loved working in Fletcher Hall – so much so that she calls it her “second home.” Fletcher Hall is where she met her two best friends, who were part of an exchange program for architecture from France.

“They were extremely creatively driven people,” Sara said. “Eventually, it brought me to France for a little while. We showed each other that making art was therapeutic.”

Those friendships, along with the mentorship and guidance from assistant professor Virgile Beddock and Liberal Arts Assistant Dean Sally Donlon, helped Sara thrive in school, despite the challenges she encountered along the way.

“Never give up,” Sara said when asked what advice she had for other students. “It took me six years to finish school. I felt the need to give up at many different points in time, but I’m really glad that I did finish and stuck through with my degree.”

'Pen to paper, idea to screen'

When Sara described how she came up with the idea for her award-winning short film, she said, “It was very similar to what my actress is doing on screen. I found myself in the mirror, and I guess it was a very strong anxiety attack, and it sparked the idea. Months passed and every week I thought about this idea and how it really, really needed to be put pen to paper, idea to screen.”

In November 2018, film lab KINOMADA brought 50 filmmakers to Lafayette for a 10-day workshop. During that time, the filmmakers created around 20 films that were shown at the annual Southern Screen Film Festival. Sara was invited to be a part of the workshop, but a death in the family prevented her from attending.

Just 25 hours before KINOMADA’s screening time, Sara resolved to create and contribute her own film for the Southern Screen Film Festival.

“The film didn’t come out how I initially planned it to be, but after getting home and seeing all the footage that I had and putting everything together, I realized it was exactly what I needed it to be,” Sara said.

They started the process at 4 p.m. the day before the deadline. By 7 p.m. the next day, it was screened for the public at the Southern Screen Film Festival.

But she didn’t want to stop there. When Sara researched other potential screenings, she discovered the International Nikon Photo Contest. The application had five different categories, and the theme for the short film category was “hope.”

“I felt that my film fit in perfectly with that,” said Sara.

Months later, when Sara received the congratulatory email, she forgot that she had submitted to the contest. The email came as such a shock that she actually thought she might be getting scammed.

But it was real, and out of the record-breaking 97,369 entries the contest received, Sara won the gold prize for the short film category. 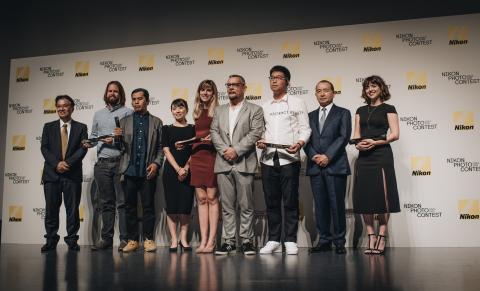 Sara Crochet, far right, with the other Nikon photo contest winners in Tokyo.

Ready for a Challenge

With her win, Sara traveled to Tokyo for the award ceremony — for free. “Traveling to Tokyo was the most bizarre thing ever. Never in a million years did I think I could be going to Tokyo for free. Everything about it was a dream,” said Sara.

Before winning this contest, Sara didn’t have her own camera and relied on other filmmakers’ equipment to shoot her films.

Now, with the camera she won through the contest, she’s prepared to continue working on her own films and she's been accepted to a Nikon-NOOR masterclass in Spain this November.

“There’s no reason to be afraid to show things and show your work and always keep creating.”